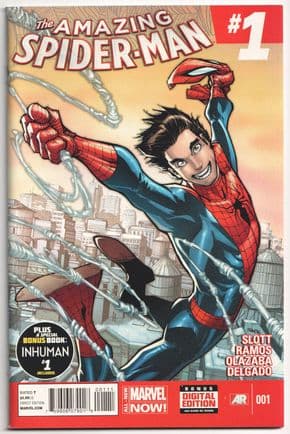 NOTE - all copies of this giant-sized issue have nicks to the top and bottom of the spine, which were caused in production when the covers were wrapped around so many pages. This has not prevented us getting 9.6 and 9.8 grades on copies submitted to CGC.

The Greatest Super Hero of All Time RETURNS! The world may have changed since Spidey’s been gone, but so has Peter Parker. This is a man with a second chance at life, and he’s not wasting a moment of it. Same Parker Luck, new Parker attitude. Putting the “friendly” back in the neighborhood, the “hero” back into “super hero,” and the “amazing” back into “Spider-Man!” Also returning: The recharged and reenergized ELECTRO!