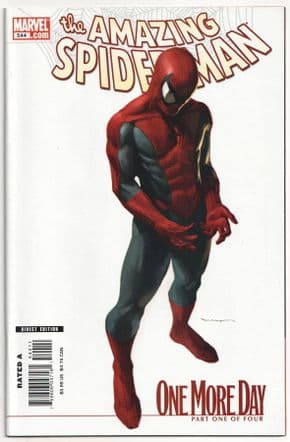 Bagged and boarded in Near Mint+ condition.

"One More Day," Part 1 of 4 Get ready for what will be the most talked–about and controversial comic event of the year -- brought to you by J. Michael Straczynski and Joe Quesada. The stakes have never been higher for Peter Parker. At his darkest hours -- and he's had plenty -- Peter has always had one shoulder to lean on, one person who'd remind him who he is, who he was, and who he can be. Now he's about to lose that person. What would he do...what would you do, if you only had "One More Day?” PLUS: Director's Cut style extras! 48 PGS.