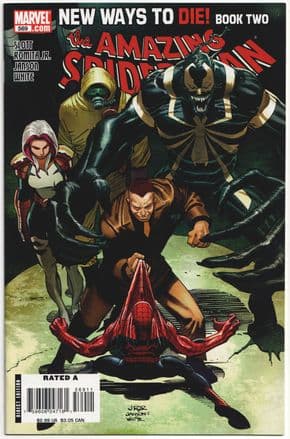 This key issue features the first appearance of Eddie Brock as Anti-Venom!

High grade unread example, bagged and boarded direct from Diamond Comics from new. It has sharp corners and a single tiny spine break on the front cover which barely breaks colour. We would expect this to achieve a 9.6 or 9.8 if submitted to CGC for professional grading.

The large scans are of the actual comic.

Written by DAN SLOTT, Pencils & Cover by JOHN ROMITA JR. "NEW WAYS TO DIE!". SPIDEY'S a villain? NORMAN OSBORN'S a hero? What kind of crazy, mixed-up world is this? Next thing you'll tell us is that black is white and white is black...Or maybe that has something to do with VENOM, MISTER NEGATIVE, and the birth of an all-new Spider Villain! Or would that be an all-new Spider-Hero? Either way, True Believer, this is a 1st appearance you do NOT want to miss!