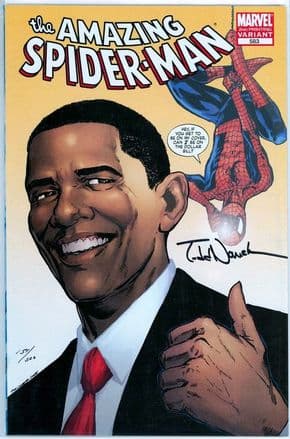 Amazing Spider-man #583 Barack Obama Second 2nd Print Variant comic book from Marvel Comics. This is a Limited Edition Signed comic from Dynamic Forces, which is signed by artist Todd Nauck. It comes sealed with a Dynamic Forces (DF) Certificate Of Autheniticity, confirming that it is one of just 349 copies produced! That makes it rarer than the First Print Obama Variant. Bagged and boarded in Near Mint or better condition.

Written by MARK WAID, Pencils by BARRY KITSON. YOU ASKED FOR IT, YOU GOT IT! PETER PARKER ON A DATE! After the revelations of "Mind on Fire", love is in the air for more than one member of the cast and Pete finally gets some time out with the ladies. (and who better to bring it to you than two men who both had dates as recently as 1987!). Amidst the romance though, forces are gathering that will spell trouble for Peter in the months to come.

This special variant comic was released to coincide with Barack Obama getting sworn in as US President and features an extra 6 page story with Spidey meeting Obama!