Astonishing Spider-man Wolverine comics published by Marvel Comics in 2010. THE HEROIC AGE IS HERE! Spider-Man and Wolverine! Everyone’s favorite wise-cracking web-spinner and ferocious furball come together in their first major series ever! The super-star creative team of Jason Aaron (WOLVERINE: WEAPON X, PUNISHERMAX) and Adam Kubert (ULT. FANTASTIC FOUR, X-MEN) send Spidey and Wolvie to the edges of the Marvel Universe as they face such awful beings as The Czar, Big Murder and Doom the Living Planet! But who is the major Marvel villain pulling the strings? And can Spidey & Wolvie refrain from killing one another long enough to find out? 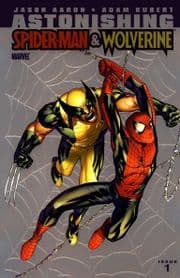 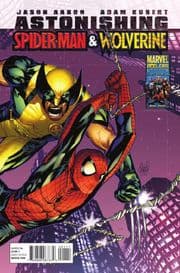