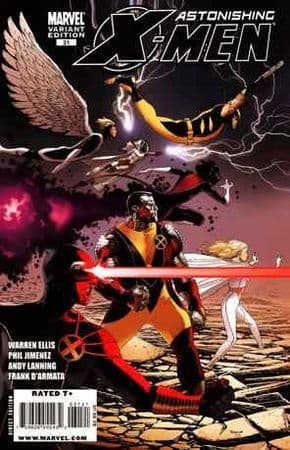 Astonishing X-Men #31 Charest Retail Variant Marvel comic book. Retailers had to order 25 copies of the standard issue to get just one of these rare X-Men variant comics.

Abigail Brand, director of S.W.O.R.D., has been in some sticky situations, and she isn’t the type who asks for help to get out of them. But when you’re careening towards Earth in the cockpit of a damaged spaceship after being attacked on an exploding asteroid 7.5 million miles from Earth…it’s time to call the X-Men. They might not have much of a plan, or much of a chance, but that’s certainly never stopped them before. Superstar artist Phil Jimenez joins writer Warren Ellis for the second arc of the mind-bending ongoing series!