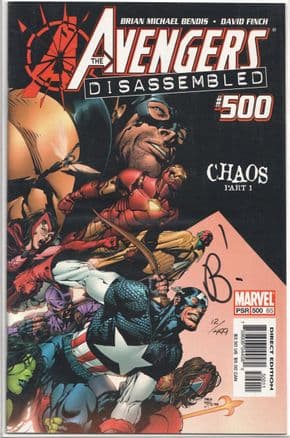 Avengers #500 Dynamic Forces Limited Edition Signed comic book set from Marvel Comics, which includes 2 copies - one signed by Brian Michael Bendis, the series writer, and the other signed by David Finch, the cover and series artist!

The set comes with the Dynamic Forces foil seals intact and matching numbered Certificates Of Authenticity (COA) #12, confirming that the signatures are authentic. Dynamic Forces produced 499 copies of these issues but only released 15 number matched sets.
The scans are of the actual items in unread Near Mint condition.