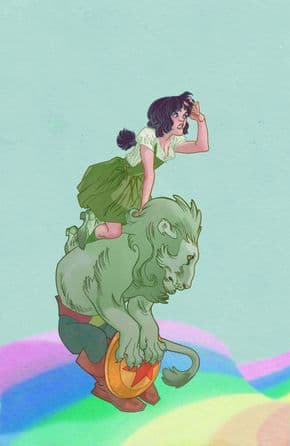 Written by C. B. CEBULSKI, Penciled by RICARDO TERCIO, Cover by CLAIRE WENDLING. We're not in the Marvel Universe anymore, Toto! When young Jennifer Walters is swept away and carried to the mysterious land Oz, she discovers that turning green is only the beginning of her troubles. But she follows the Rainbow Road and encounters a familiar cast of characters more in need of help than her; a rusty old Iron Man in need of a heart, a scarecrow whose lost his hammer and maybe his mind, and a brave old warrior who simply needs to find his courage. And just when they thought things couldn't get any worse, the Scarlet Witch of the West arrives to utter three ominous words... "No More Munchkins!"