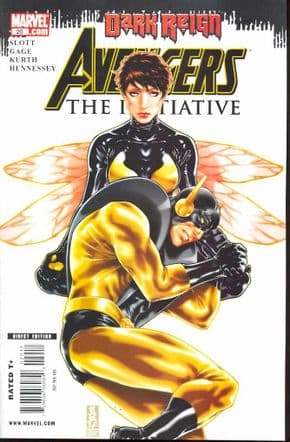 Avengers Initiative #20 (2008) Secret Invasion Marvel comic book. Written by DAN SLOTT & CHRISTOS N. GAGE, Pencils by STEVE KURTH, Cover by MARK BROOKS, "Acceptable Losses". The Invasion is over and the Initiative has been rocked to its core.Now that the truth is out, that the program was conceived as part of a Skrull plot, can it survive?Who will leave?Who will stay?And who will lead them?Also:Learn what's become of the REAL Hank Pym! And when Taskmaster discovers Mutant Zero's true identity, she gets fightin' mad! For fans of the Marvel Universe, this issue is one of the most important comics of the year as key members of the Initiative graduate and/or move on to four major Marvel titles!