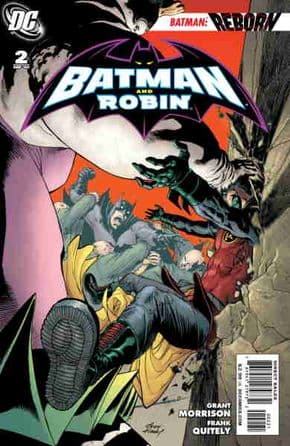 Batman And Robin #2 Retailer Incentive Variant comic book from DC Comics. Retailers had to order 25 copies of the standard issue to get just one of these rare variant comics.

Written by Grant Morrison; Art and Cover by Frank Quitely; Variant Cover by Andy Kubert. "Batman Reborn" continues with the reteaming of Grant Morrison and Frank Quitely (ALL-STAR SUPERMAN, WE3, New X-Men)! In a blazing Gotham City police department, the new Batman and Robin face the bizarre, fighting freakshow that is the Circus of Strange and find that they don't make as good a team as Batman had hoped! Meanwhile, the mysterious Sasha escapes from Professor Pyg and vows vengeance on the people who killed her father.