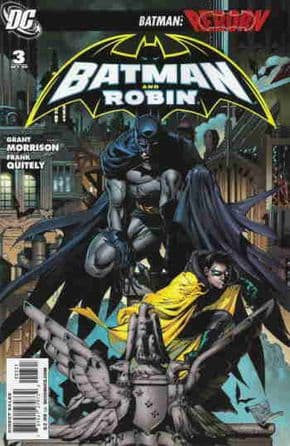 Batman And Robin #3 Retailer Incentive comic book from DC Comics. Retailers had to order 25 copies of the standard comic to get just one of these rare variant comics!

Written by Grant Morrison; Art and cover by Frank Quitely; Variant cover by Tony Daniel. "Batman Reborn" concludes the explosive reteaming of Grant Morrison and Frank Quitely (ALL-STAR SUPERMAN, WE3, New X-Men)! Witness Batman and Robin's final showdown against Professor Pyg and the Circus of Strange! The future looks bright for the new Dynamic Duo as they prove themselves in battle, but lurking in the shadows is a mysterious red-hooded vigilante. Also, the origin of Scarlet!