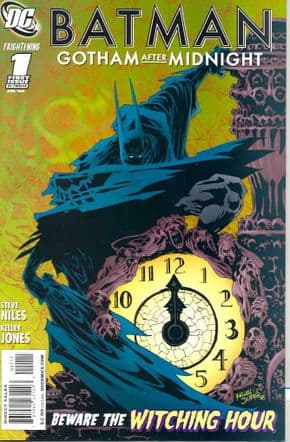 Batman Gotham After Midnight #1 comic book from DC comics. Written by Steve Niles, Art and cover by Kelley Jones. "There are things that go 'bump' in the night. Be thankful that one of those things is on our side...". When the full moon rises and casts its eerie glow over the land, the creatures of the night come out to hunt and feast and prey on the innocent citizens of Gotham City, and only one man stands in their way: The Batman. These are the bizarre and frightening case files of the Dark Knight Detective, featuring grave-robbers, men making monsters, night terrors, and the debut of an all-new moonlight monster known only as Midnight. In this fatal first issue by the creative team of Steve Niles (30 Days of Night, SIMON DARK) and Kelley Jones (BATMAN: RED RAIN), Batman will come face-to-face with the Master of Fear himself - but just what is the Scarecrow after? And what does it have to do with the Axeman? Could it be some elaborate scheme to trap the Bat? Be here at the beginning -and beware!