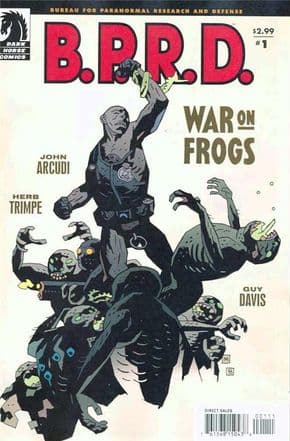 Dark Horse Comics B.P.R.D. War On Frogs #1 One Shot Comic. Legendary artist Herb Trimpe (The Incredible Hulk) joins regular B.P.R.D. writer John Arcudi and Hellboy creator Mike Mignola for the first of four one-shots which pick up from the March-April B.P.R.D. feature on MySpace/Dark Horse Presents. These stories are set before the events of B.P.R.D.: The Black Flame, chronicling the Bureau for Paranormal Research and Defense's fight against the frog monsters. As the frog cult spreads across America, Roger the Homunculus returns to the site of the B.P.R.D.'s first clash with the frog creatures- the ruins of Cavendish Hall, where Hellboy, Abe, and Liz first encountered both the frogs and Rasputin (Hellboy: Seed of Destruction)- to track down the final pieces of the puzzle of the Cavendish family. Cavendish family puzzle solved!