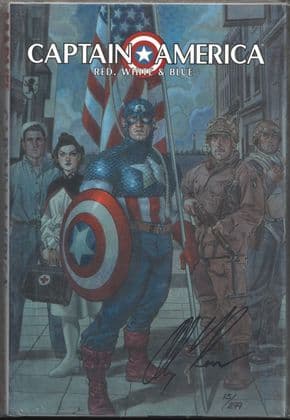 It comes with the Dynamic Forces holofoil seal intact and numbered Certificate Of Authenticity confirming that it is one of just 299 copies produced. The scans are of the actual comic in unread, Near Mint condition.

In this thought-provoking original graphic novel, a world-class collection of top comic-book creators from around the globe presents a series of uniquely personal visions of the heroic icon that is Captain America! Red,White & Blue roams between the humorous and the serious, the farcical and the personal invoking the power people give over to Captain America. In all, more than 50 creators have crafted timeless stand-alone stories each told with a color palette limited to Cap's signature colors of red, white and blue! In addition to these original short stories, this anthology reprints the back-up stories in Captain America #50 (2002) And Marvel Spotlight: Captain America Remembered. 192 page colour hardcover.