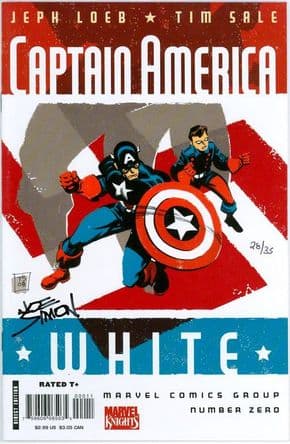 It is sealed with a Dynamic Forces Certificate Of Authenticity (COA) confirming that the signature is authentic. Limited to just 35 copies produced. Near Mint condition.

Written by JEPH LOEB, Pencils & Cover by TIM SALE. Jeph Loeb and Tim Sale, the Eisner award winning team (DAREDEVIL: YELLOW, SPIDER-MAN: BLUE, HULK: GRAY, Batman: The Long Halloween, Superman For All Seasons, Television's HEROES) return to Marvel and their prestigious "color" book series.CAPTAIN AMERICA: WHITE is their newest creation, peeling back an untold tale of Captain America and Bucky during World War II.Their unique combination of in-depth characters and high stakes action shines here with Cap's deadliest mission of all.Marvel is proud to bring you Captain America: #0 this summer as a taste of what's to come. Featuring an all new full story about the Origin of Bucky Barnes and how he came into Cap's life, this special edition features a cover gallery, sketchbook, script samples, and an interview with the creators. They are happy to be back at Marvel and we're thrilled to have them!