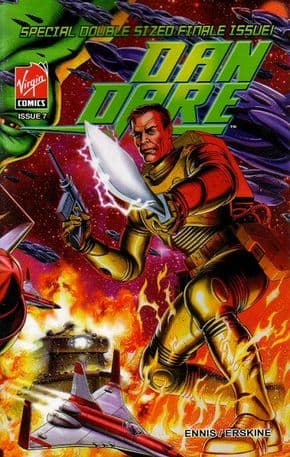 Dan Dare #7 (2008) Virgin comic book. Written by: Garth Ennis, Art by: Gary Erskine, Cover by: Garry Leach. SPECIAL DOUBLE-SIZED FINALE ISSUE! It's the final showdown between the Mekon's massive Treen fleet and the British Navy's own trusty ships.Will the Mekon's desire to enslave the human race and destroy Dan Dare finally be realized... or will determination in the face of grim circumstances win out over the blind obedience and sheer numbers of the Mekon's force?Don't miss this heart-stopping conclusion to this gripping story!