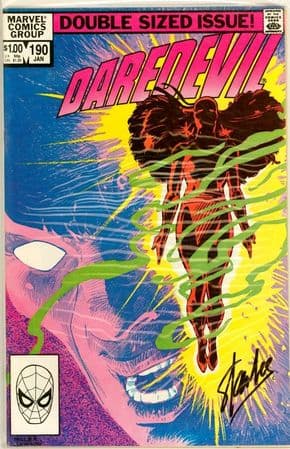 Daredevil #190 Dynamic Forces Limited Edition Signed comic book, from Marvel Comics, which is signed by Stan "The Man" Lee, the late Marvel Comics Legend, original writer and co-creator of Daredevil back in 1964!

It comes with the Dynamic Forces (DF) holofoil seal intact and complete with a Certificate Of Authenticity (COA) from DF confirming that the signature is authentic!

The comic itself is a key issue from the Frank Miller run on the Daredevil comics series, featuring the Resurrection of Elektra!

The scans are of the actual item in around Near Mint condition.