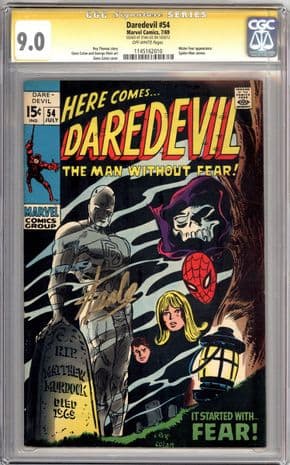 Daredevil #54 First Print (1969) CGC 9.0 Signature Series comic book, from Marvel Comics, which has been signed by Stan Lee, the late Marvel Comics legend, co-creator and the original writer on Daredevil!!

The original unsigned comic was part of the "Uncle Stan Collection", which were comics sent by Stan Lee to his nephew John Lieber, who lived in Bristol, and were auctioned by Comic Book Postal Auctions in March 2001. Included is the Certificate Of Authenticity from CBPA which has a reproduction of the original note that Stan Lee wrote to John Lieber to give permission to sell the collection.

It has been professionally graded by CGC, the largest independent comic grading company in the world, and slabbed in a sealed tamper proof protective case.

The comic grade is guaranteed to be high grade 9.0 (VERY FINE/NEAR MINT) and this is a yellow label CGC Signature Series, which means that an authorised CGC representative witnessed the signing and this also acts as a Certificate Of Authenticity. CGC remove the comic as soon as it is signed and ship it to their facility in Florida, to ensure that the signature is authentic.

You can check the grading and authenticity of the signature by entering the 10 digit serial number on the yellow label at the CGC comics web-site.

There are no cracks or scratches on the outer case.