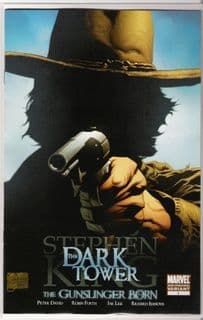 A super Near Mint copy of this Marvel Comics Dark Tower The Gunslinger Born #1 second print variant comic. A second printing of the sold-out first issue with a cover by Quesada! The man in black fled across the desert, and the gunslinger followed." With those words, millions of readers were introduced to Stephen King's Roland, an implacable gunslinger in search of the enigmatic Dark Tower, powering his way through a dangerous land filled with ancient technology and deadly magic. Now, in a comic book personally overseen by King himself, Roland's past is revealed! Be there for the very beginning of a modern classic of fantasy literature!This is the first comic adaptation of Stephen King's classic series.