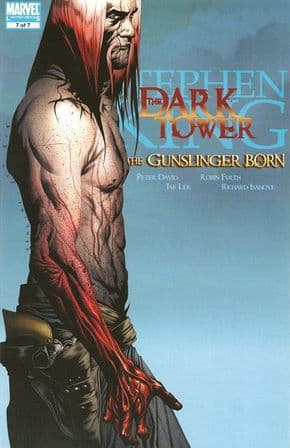 Dark Tower The Gunslinger Born #7 comic book from Marvel Comics based on the Stephen King series. This is a first Print with a great cover by Jae Lee, bagged and boarded in NM condition. It’s the final chapter in the first arc of this top-selling title from the mind of Stephen King. Roland and his ka-tet have their long-awaited showdown with Eldred Jonas and the Big Coffin Hunters. And on the outcome of this fateful confrontation rests the future of Mid-world itself! Plus—the tragic conclusion of Roland Deschain’s love affair with Susan Delgado and much, much more!