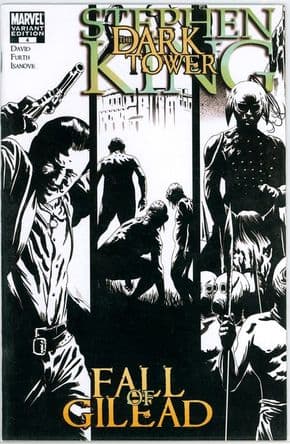 Dark Tower: The Fall Of Gilead #4 Richard Isanove Retail Sketch Variant comic book, based on the novels of Stephen King, from Marvel Comics. Retailers had to order 75 copies of the standard comic to get just one of these rare variant comics. Bagged and boarded in NM condition.

Amidst the schemes that have taken hold of Gilead, there sits the grieving Aileen Cort, the girl who wanted nothing more than to be a gunslinger-and to claim the heart of the stoic Roland Deschain. But what does the death of the man who raised her and Roland's involvement in his mother's murder mean for their budding romance...and for Gilead itself?