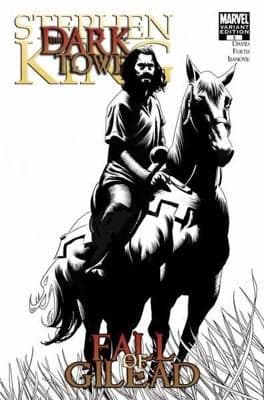 Dark Tower: The Fall Of Gilead #5 Isanove Retail Sketch Variant comic book, based on the novels of Stephen King, from Marvel Comics. Retailers had to order 75 copies of the standard comic to get just one of these rare variant comics. Bagged and boarded in NM condition.

Farson’s men have arrived! Every man and boy over the age of eleven is armed and prepared for battle. The women and children hide themselves deep within the city. And while the war rages, an injured Steven Deschain fights his way home through the wreckage with a singular determination…all in hopes of saving his imprisoned son Roland. It’s the penultimate chapter of Stephen King’s magnum opus that will change the world of Dark Tower forever!