Dark Tower The Gunslinger: The Journey Begins comics, based on the Stephen King Dark Tower novels, published by Marvel Comics. A BOLD NEW CHAPTER IN STEPHEN KING’S THE DARK TOWER SAGA BEGINS HERE! Twelve years have passed since the fateful Battle of Jericho Hill and the fall of the gunslingers. Since the Affiliation’s resistance against John Farson became little more than a faint memory. Since the friends that stood by young Roland Deschain burned to ash in the Good Man’s razing of Gilead. But Roland survived…and now he stalks the desert, hunting the spectral Man in Black in his quest for the Dark Tower. Join Robin Furth, Peter David and Richard Isanove as they welcome superstar artist Sean Phillips (INCOGNITO) into the ka-tet of creators entrusted by Stephen King himself to bring the adult adventures of his most personal creation to life! 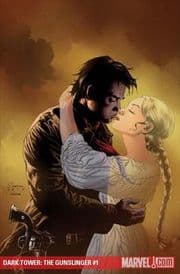 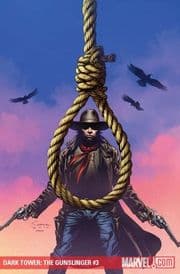