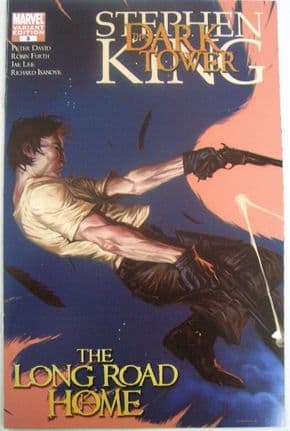 Dark Tower The Long Road Home #3 Retail Variant comic book from Marvel Comics. This variant cover by Marko Djurdjevic was only available to retailers on the basis of 1 variant for every 25 copies of the standard issue ordered. Roland’s spirit is trapped inside Maerlyn's sinister Grapefruit and is taken on a terrifying journey to the outer reaches of End-World...to the harsh domain called Thunderclap! Back in Mid-World, Roland’s ka-tet is pursued by the Hambry posse which intends to kill them all before they are able to cross the Xay River on their journey home. Revenge will soon be at hand for Eldred Jonas and the Big Coffin Hunters.