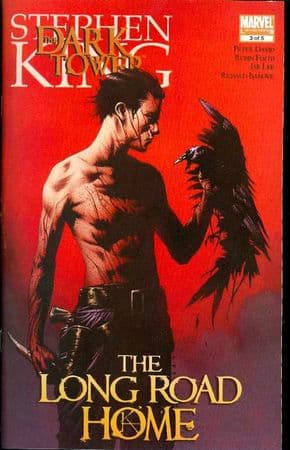 Marvel Comics Dark Tower The Long Road Home #3 comic. Written by PETER DAVID & ROBIN FURTH, Pencils & Cover by JAE LEE & RICHARD ISANOVE. With Roland's consciousness trapped within Maerlyn's Grapefruit, his ka-tet companion, Alain, enters the mystical todash space in an attempt to rescue his friend. But as he and Roland flit in and out of alien dimensions, Cuthbert, the last member of their ka-tet, desperately tries to stave off a pack of slavering mutant wolves who have come to devour the unconscious Roland and Alain! 48 PGS