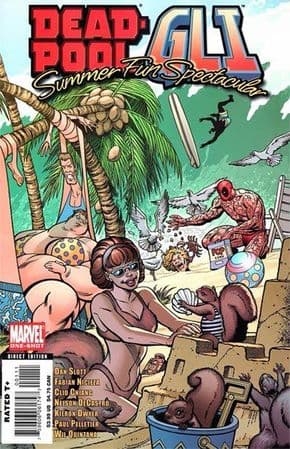 Deadpool GLI Summer Fun Spectacular comic book from Marvel Comics. When you think of summer, what are the first things that come to mind? Ninjas, hitmen and summer school lessons from the merc with a mouth, Deadpool, right? Well, thats what youre getting with Marvel's special Deadpool/GLI - Summer Fun Spectacular, written by Dan Slott (She-Hulk, Avengers: The Initiative) and Fabian Niceza (Cable/Deadpool), with art from Paul Pelletier, Clio Chiang, Nelson Decastro & Kieron Dwyer, plus a knockout cover from Pelletier! With Deadpool's checkered past, and the do good spirit of the Great Lakes Initiative (Formerly The Great Lakes Avengers), it's hard to imagine a team up between the two sides, but Slott and Niceza know a match made in heaven when they see it! C'mon, are you really going to turn down ninjas, Deadpool doing his best imitation of a teacher and the scintillating romance of Squirrel Girl & Robbie Baldwin?