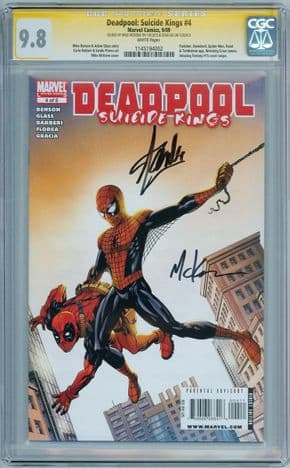 Deadpool Suicide Kings #4 CGC 9.8 Signature Series comic book, from Marvel Comics, which is signed by Stan Lee, the late great Marvel Comics Legend, cameo actor in the Deadpool Movies and co-creator of the X-Men back in 1963!!

The comic is also signed by Mike McKone, the artist whose cover features a pastiche of the original first appearance of Spider-man back in Amazing Fantasy #15 in 1962!

The comic features appearances by Spider-man, Daredevil and the Punisher.

The grade is guaranteed to be high investment grade 9.8 (NEAR MINT/MINT) and this is a yellow label CGC Signature Series, which means that an authorised CGC representative witnessed the signings and this also acts as a Certificate Of Authenticity. As soon as the comic is signed, it is removed by a CGC authorised party and submitted straight to CGC for grading and encapsulation, guaranteeing the authenticity of the signatures.

You can check the validity of this item and the signatures by entering the 10 digit number on the label at the CGC web-site at www.cgccomics.com

There are no cracks on the case. Any glare in the image is just the scanner on the CGC case, which can cause reflection.