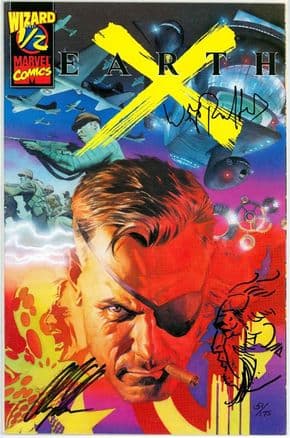 Earth X Wizard #1/2 Dynamic Forces Signed & Remarked Limited Edition comic book from Marvel Comics, which is signed by the creative team of Alex Ross, Jim Krueger and Bill Rheinhold who has added a nice original piece of artwork in the form of an Earth X ​​​​Logan head sketch.

The comic book comes with the Dynamic Forces seal intact and a numbered Certificate Of Authenticity (COA) confirming that the signatures and sketch are original and that it was limited to just 175 copies produced.