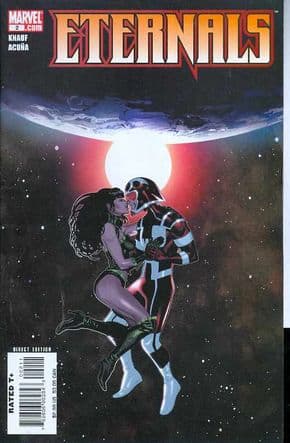 Eternals #2 (2008) Marvel Comics US Import. Written by CHARLES & DANIEL KNAUF, Pencils & Cover by DANIEL ACUÑA. The powerful Eternals stand divided as they race to awaken the missing members of their race!On one side, the power of Ikaris and Thena, guided by Makaari and his connection with the dreaming Celestial!On the other, the dark lord of Vorozheika, the dreaded Druig, finding his lost kin through means unknown!But on whose side does Ajak, the celestial's former liaison, fall? Plus: appearances by the Invincible Iron Man and The Order!