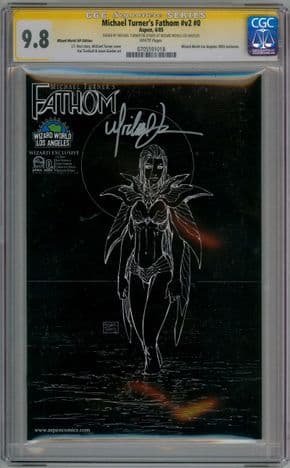 This rare Fathom variant comic was only available to VIP ticket holders at the Wizard World Los Angeles comic convention, who received one copy per ticket.

The grade is guaranteed to be high investment grade 9.8 (NEAR MINT/MINT) and this is a yellow label Signature Series, which means that an authorised CGC representative witnessed the signing and this also acts as a Certificate Of Authenticity.

As soon as the comic is signed, it is removed by a CGC authorised party and submitted straight to CGC for grading and encapsulation, guaranteeing the authenticity of the signature.

You can check the validity of this item and the signature by entering the 10 digit number on the label at the CGC web-site at www.cgccomics.com

There are no cracks on the case. Any glare is just the scanner on the CGC case, which can cause reflection.