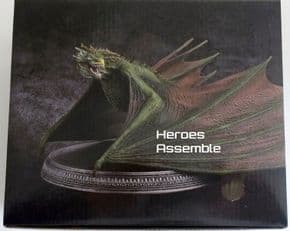 The Game Of Thrones Collector's Models from Eaglemoss Publications presents the Special Premium Edition Dragon #1 Rhaegal. Rare limited edition that was only available to direct subscribers in the UK.

The green & bronze dragon, Rhaegal, is a winged, fire-breathing weapon of war and joins the Game of Thrones Figurine Collection just in time! A terrifying creature, capable of devastating cities, naval fleets and entire armies with blazing dragon fire, Rhaegal is loyal to his ‘Mother’, the Targaryen heir, Daenerys.

The hand-painted model depicts Rhaegal as he prepares to take flight and rain dragon fire down upon the Masters’ Armada, as they attack Meereen in Season 6, Episode 9, ‘Battle of the Bastards’. Rhaegal stands 7 cm tall, and his wingspan is 16 cm. Capturing the details, head and textures and colouring of Rhaegal’s spine, head and powerful, gaping jaws.