You knock at the door of the old mansion up on the hill, and who answers? Your host, none other than Gene Simmons, beckoning you inside. The door slams shut. You try to run, but it's too late... you've entered the home of Simmons Comics Group and there's no turning back. Gene Simmons House of Horrors kicks of an all-new line of comics created by the rock legend. Up first, this quarterly anthology of tales of terror, all presided over by the man in black, Gene Simmons, who also scripts all his own dialogue for the comic. 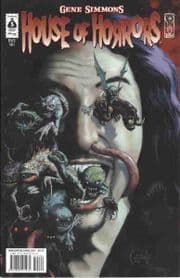