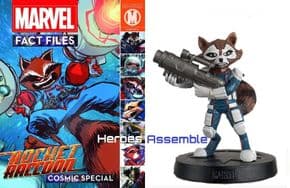 The Marvel Fact Files Cosmic Special series expands the MFF figurine line with characters from the furthest reaches of the Marvel Universe. Issue one features Rocket Racoon who stands at approximately 3 inches tall and comes with a 20-page magazine.

“Ain’t nothing like me except me,” taking you to the cosmos in the action packed space mini-series adventure – Guardians of the Galaxy. One of the breakout characters since the movie’s first introduction is Rocket who is wanted on over 50 charges of vehicular theft and escape from lockup.

The collectible figurine stands proudly at 86mm and we have taken inspiration from artist Clint Langley’s, we posed the figurine with an over-sized cannon and look of grit and determination. The final costume we choose is taken from the Guardians of the Galaxy Infinite series beautifully illustrated by Ming Doyle.

Inside your magazine we take an in-depth look at the comic history of a genetically modified talking raccoon.