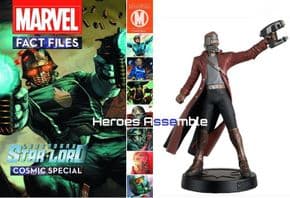 This movie-accurate figurine stands proudly at 138mm, which includes the element gun, the mask, his famous boots which Peter’s boots not only contain hidden compartments, they also house rocket thrusters in the soles and a military style costume. Inside your magazine, we take an in-depth look at the comic book history of the self-appointed protector of the galaxy and a great addition to any Marvel or Guardians of the Galaxy fans' collection.