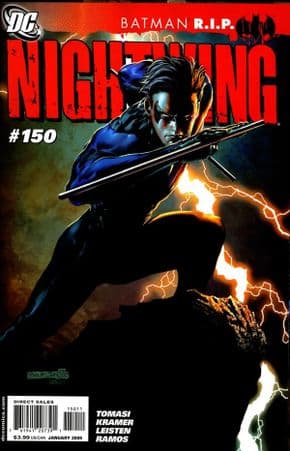 Nightwing #150 R.I.P. (2008) Death Of Batman DC comic book. Special oversized "Batman R.I.P." tie-in issue! Believing Nightwing responsible for the death of an old flame, Two-Face has sworn his revenge upon Batman's first Robin and New York City itself. Armed with the same acid that turned him into Two-Face, Harvey Dent plans to scar half the population of New York to make them pay for his loss. And without The Dark Knight around for help, it's up to Nightwing to stop the Batman's most duplicitous and dangerous villain. Beware the acid rain as Nightwing confronts Two-Face in the final chapter of "The Great Leap"!