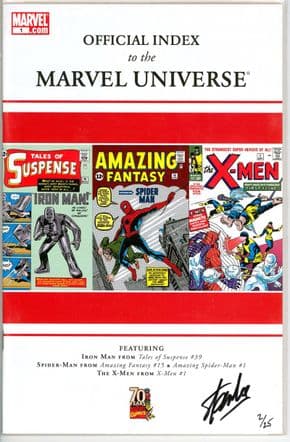 Official Index To The Marvel Universe #1 Dynamic Forces Limited Edition Signed comic book, from Marvel Comics, which is signed by Stan Lee, the late Marvel Comics Legend and co-creator of Spider-man, Iron Man and the X-Men as featured in this issue!

It comes sealed with a low numbered Dynamic Forces Certificate Of Authenticity (COA) #2 confirming the authenticity of the signature and that it is one of just 25 copies ever produced.

This issue reprints classic first appearances of Spider-man, Iron Man and the X-Men