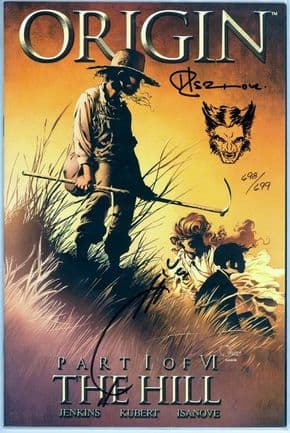 Wolverine The Origin #1 First Print Dynamic Forces Signed and Re-marked Limited Edition comic book from Marvel Comics, which has been signed Joe Quesada, artist & Marvel Editor In Chief, and Richard Isanove, the series inker who has also added a piece of original art to the cover in the form of a head sketch of Logan / Wolverine. Most copies have a side profile, but this rarer issue has a face on profile.

It comes with the Dynamic Forces holofoil seal intact and a numbered Certificate Of Authenticity (COA) of just 699 copies produced.