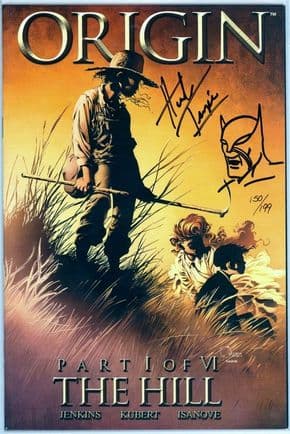 Wolverine The Origin #1 Dynamic Forces Limited Edition Signed & Remarked comic book, from Marvel Comics, which is signed by Herb Trimpe RIP, the late co-creator of Wolverine and the first artist to draw the character!

Herb Trimpe added an original artwork inked sketch onto the cover, in the style that he drew the character back in Incredible Hulk #180 and #181!

It comes with the Dynamic Forces (DF) holofoil intact, complete with a numbered DF Certificate Of Authenticity (COA) confirming that the signature and sketch is authentic and that it is one of a limited edition of just 199 copies produced.

The large scans are of the actual item, in Near Mint or better condition.