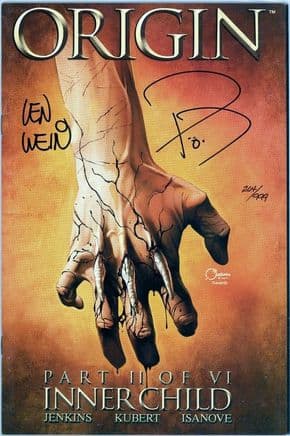 Origin #2 "The Writers Deluxe Edition" Dynamic Forces Limited Edition Signed comic book from Marvel Comics, which has been signed by Paul Jenkins, the British series writer, and signed by the late Len Wein, the X-Men and Wolverine writer who co-created Wolverine in Incredible Hulk #181!

It comes with the DF holofoil seal intact and a numbered Certificate Of Authenticity (COA) confirming that the signatures are authentic and that just 999 copies were produced.
The scans are of the actual item. Bagged and boarded in Near Mint condition.