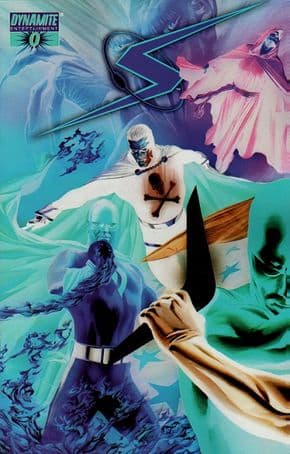 Dynamite Entertainment Project Superpowers #0 Alex Ross Negative Retail Incentive Variant 1:100. Retailers had to order 100 copies of the standard edition to get jsut one of these hard to find Alex Ross variant covers!

From the dawn of the 20th Century came a new chapter in mankind's history, unleashed during a time of great war and destruction. It was the beginning of the Age of the Superpowers, yet with the closing of the Second World War, this new spark seemingly flickered and died. Until now! This explosive #0 issue features a story crafted by Justice collaborators Alex Ross and Jim Krueger, joined by artists Stephen Sadowksi, Doug Klauba and featuring a final page painted by Ross himself! The story of Superpowers begins here, in the present day with the Fighting Yank, coming to terms with the ghosts of his past and present! Journey to the heights and depths of the Second World War as the story unfolds and come face-to-face with the great forgotten heroes of the ages, and solve the mystery of these legends disappearance after the great war!