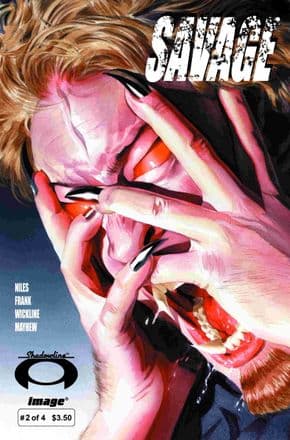 Savage #2 (2008) Steve Niles Image comic book. Story STEVE NILES, JEFF FRANK & DANIEL WICKLINE, art & cover MIKE MAYHEW. Peter is a shoe salesman who feels belittled by his family and lost in a dead-end world when his life takes a turn for the worse. That's when Sam, a crazy old monster-hunter kidnaps Peter, drags him into the middle of the woods and shows him that his neighbors are actually werewolves. But Sam has an even bigger secret... We can choose to be a hero or a monster... he can be both!