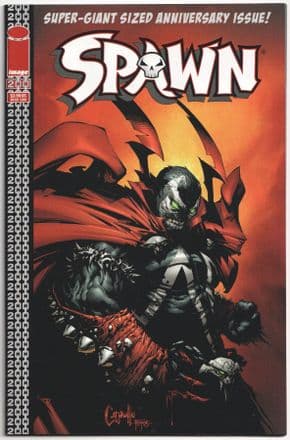 Non-distributed unread example, with the tiniest (less than 1mm) single spine tick on front cover that does not break colour and sharp corners. High grade example which we would expect to achieve at least a 9.6 and more likely a 9.8 if submitted to CGC for professional grading.

The scans are of the actual item. Bagged and boarded.

In June of 1992 the first issue of TODD McFARLANE's SPAWN hit bookshelves in record numbers. Now, 19 years later, the new Spawn, Jim Downing, comes head to head with the biggest enemy of the Spawn universe, with his new sidekick Clown. Can this dynamite duo team up long enough to survive the return of a ruthless Spawn villain? And what happens when GOD gets into the action? This double-sized issue is jam packed with over a dozen of comic's greatest creative talents. Spawn #200 features the long awaited return of TODD MCFARLANE and GREG CAPULLO to interior artwork!