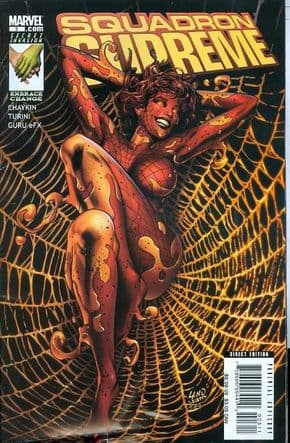 Squadron Supreme 2 #3 (2008) Marvel comic book. Written by HOWARD CHAYKIN, Penciled by MARCO TURINI, Cover by GREG LAND. "POWER TO THE PEOPLE". Meet Arachnophilia-she's the kind of girl who always hoped the neighbors would describe her as "a quiet girl, who kept to herself"...right after she took out her homeroom with an automatic rifle. But now that this teenage outcast has found herself endowed with spider-like powers...life might just be looking up. Elsewhere, Ultimate Nick Fury learns why four astronauts returned to Earth transformed into something eerily familiar...and utterly fantastic. Meanwhile-Nighthawk takes this opportunity to make his dramatic return!