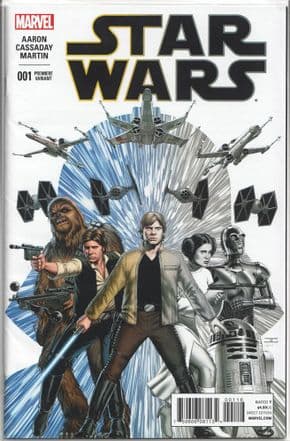 Star Wars #1 Premiere Retailer Variant comic book from Marvel Comics, published in 2015.
This extremely rare partial sketch variant cover edition was only sent to retailers that participated in the Star Wars launch party promotion in 2015. Each one has the retailers name, Heroes Assemble in this case, printed on the inside cover letter.
Scans are of the actual item in VFN/NM condition, with several spine stresses due to the way that Marvel/Diamond shipped them!
THE GREATEST SPACE ADVENTURE OF ALL TIME RETURNS TO MARVEL!