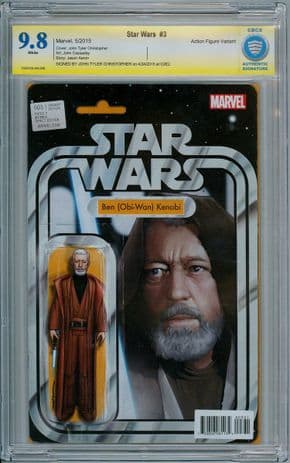 It has been professionally graded by CBCS, the largest independent comic grading company in the world, and slabbed in a sealed tamper proof protective case. CBCS also authenticated the original creator signature.

The comic grade is guaranteed to be high investment grade 9.8 (NEAR MINT/MINT) and this is a yellow label CBCS Signature Series, which means that an authorised CBCS representative witnessed the signing and this also acts as a Certificate Of Authenticity.

There are no cracks on the case. Any glare on the scan is just caused by reflection on the outer case from the scanner.

You can check the validity of this item by entering the serial number on the label at the CBCS web-site.

There are no cracks on the case. Any glare is just the scanner on the outer case, which can cause reflection.