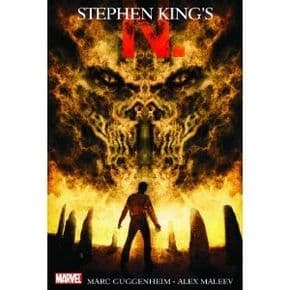 Stephen King's N Premiere Hardcover Graphic Novel from Marvel Comics. Written by MARC GUGGENHEIM Penciled by ALEX MALEEV Cover by ALEX MALEEV There is something unearthly and mysterious deep in Ackerman's Field in rural Maine. There is a Stonehenge-like arrangement of seven stones with a horrifying EYE in the center. And whatever dwells there in that strange, windswept setting may have brought about the suicide of one man...and harbor death for the OCD afflicted 'N.', whose visits to the field have passed beyond compulsion into the realm of obsession. Based on the chilling short story from the recent Stephen King collection, JUST AFTER SUNSET, this adaptation will provide nightmares aplenty. Just keep counting the stones...keep counting...counting... Collecting STEPHEN KING'S N. #1-4. 112 PGS.