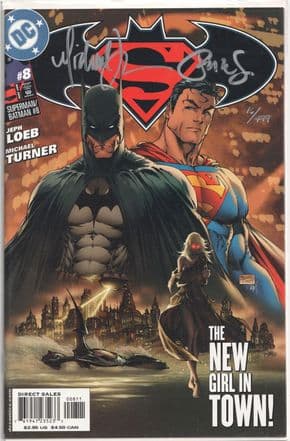 Superman Batman #8 First Print Dynamic Forces Limited Edition Signed comic book from DC Comics, which is signed by the late Michael Turner, who provided the cover and interior artwork for this issue. It is also signed by artist Peter Steigerwald, who coloured Turner's work for many years,

It comes complete with the Dynamic Forces holofoil seal intact and a numbered Certificate Of Authenticity (COA) limited to just 499 copies produced, confirming that the signatures are authentic.

The scans are of the actual comic in Near Mint+ condition.

This was Michael Turner's first work on the Superman Batman series. A super Near Mint copy of this very hard to find signed comic book.