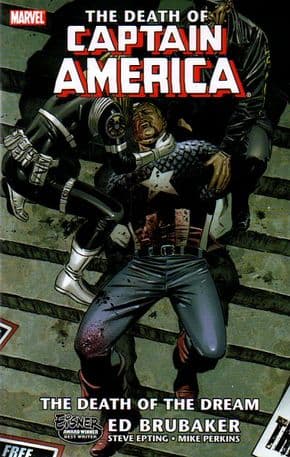 The Death of Captain America Graphic Novel TP Trade Paperback from Marvel Comics. “The quintessential American super hero is dead.” – U.S. News & World Report Leaping from the final pages of CIVIL WAR, this is the biggest Cap story that Ed Brubaker and Steve Epting have yet to tell – guaranteed to stun readers and send shockwaves through the entire Marvel Universe! As repercussions ripple outward, the Winter Soldier finally chooses a side – his own. But what are the Red Skull and his minions up to behind the scenes? Collecting CAPTAIN AMERICA #25-30.