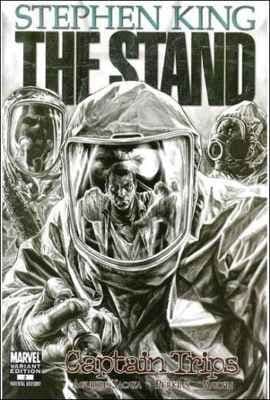 The Stand Captain Trips #2 Retailer Incentive Sketch Variant comic book from Marvel Comics. Written by Roberto Aguirre-Sacasa, Penciled by Mike Perkins, Cover by LEE BERMEJO & LAURA MARTIN. Retailers had to order 75 copies of the standard comic to get just one of these! Stephen King's horror epic continues in this issue as the unseen killer, the super-flu Captain Trips, spreads across the entire country, a tide of disease and death. Meanwhile, in Atlanta, in the Center for Disease Control, the US government has taken a keen interest in Stuart Redman, who seems to be the only person immune to the Captain Trips infection. They are determined to find out why--with or without Stu's cooperation. And what do the recurring nightmares Stu's been having--about a dark man with red eyes standing in a cornfield--mean? Plus: Frannie Goldsmith and her father! Larry Underwood in New York! And Nick Andros takes a wrong turn in Shoyo, Arkansas!