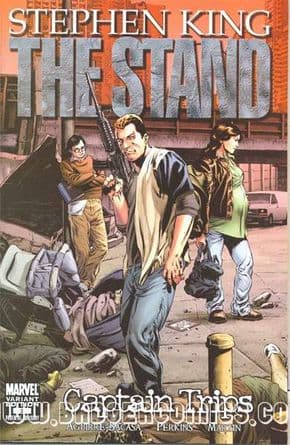 The Stand Captain Trips #2 Retail Variant comic book from Marvel Comics. Written by Roberto Aguirre-Sacasa, Penciled by Mike Perkins, Cover by LEE BERMEJO & LAURA MARTIN. Stephen King's horror epic continues in this issue as the unseen killer, the super-flu Captain Trips, spreads across the entire country, a tide of disease and death. Meanwhile, in Atlanta, in the Center for Disease Control, the US government has taken a keen interest in Stuart Redman, who seems to be the only person immune to the Captain Trips infection. They are determined to find out why--with or without Stu's cooperation. And what do the recurring nightmares Stu's been having--about a dark man with red eyes standing in a cornfield--mean? Plus: Frannie Goldsmith and her father! Larry Underwood in New York! And Nick Andros takes a wrong turn in Shoyo, Arkansas!